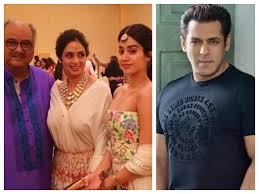 Janhvi Kapoor shares a close bond with parents Sridevi and Bonny Kapoor. She has always adored her parents right from when she was a child and we have proof.  Sridevi and Boney had once attended Salman Khan’s television reality show where they were asked as to how many percent of people in India think marriages are made in heaven.

While the couple guessed their answers, Salman turned to little Janhvi and Khushi sitting in the audience and asked them what they think of the same.

While Khushi said she does not know, Janhvi promptly replied saying that she knows her mom and dad’s marriage is made in heaven.

Janhvi and Khushi are currently self-quarantined at home due to coronavirus lockdown along with their father. They are making the most of their free time at home by spending some quality time with their daddy  and with each other.

Meanwhile, on the work front, Janhvi will next be seen in ‘Gunjan Saxena: The Kargil Girl’. The movie also features Angad Bedi and Pankaj Tripathi in key roles. Apart from this, she will also be seen in the second instalment of ‘Dostana’ co-starring Kartik Aaryan and Lakshya.