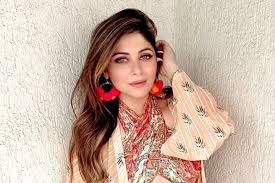 “Her reports are now negative but we will wait for one more test before she is allowed to go home,” said Prof R.K. Dhiman, director of the Sanjay Gandhi Postgraduate Institute of Medical Sciences (SGPGI) in Lucknow where she is undergoing treatment.

Now, the result of her sixth test has come, which is also negative. Even though Kanika Kapoor has now been discharged from the hospital, she will be home quarantined for the next 14 days.

Kanika was admitted on March 20 when her tests revealed that she was coronavirus positive.

Her five reports showed her as coronavirus positive. But her sixth report showed coronavirus negative.

Kanika is the first Bollywood celebrity to test positive for the deadly virus in the country.

The singer who had come from London on March 9 was slammed by the media for interacting with hundreds of people at parties and other events in Lucknow even though she had symptoms of Corona.

Meanwhile, three FIRs have been filed against Kanika on charges of negligence for attending various social events in the city despite being infected with coronavirus and having been instructed by the authorities to isolate herself at her home.