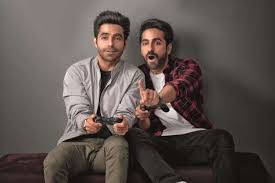 Aparshakti is known for his comic timing in  movies like ‘dangal ‘, ‘stree ‘, ‘Happy fir bhagg jayegi ‘or ‘pati patni aur woh’ he has made the public laugh a lot and in response public has also given him a lot of love for all his roles that he has been in to

Ayushman in an interview has said “it is difficult to become a character actor and engage people . Aparshakti has done an amazing job in his recent films and i think he deserves to be a lead actor ”

the actor also said that he takes time to open up with people but Aparshakti is totally opposite to him , he makes friends very easily and a lot of them .

now lets see will Aparshakti be given any lead role ? if yes , will he be able to stand on the hopes of the people and more importantly his brother Ayushman Khurana .