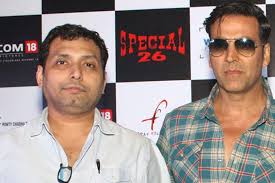 Duo of Akshay Kumar and filmmaker Neeraj Pandey, who have entertained the audience with spectacular films like ‘Baby’, ‘Special 26’ and ‘Rustom’ were all set to team up for another project titled ‘Crack’ but the project never took off.

Recently in an interview, the ace filmmaker revealed that the project has been postponed as he is currently focussed on his next film with Ajay Devgn which is titled as ‘Chanakya’. Apart from that, he has other projects in the pipeline so,  teaming up with Akshay for ‘Crack’ looks quite unlikely at the moment.

On the work front, Akshay will soon be seen in Rohit Shetty’s cop drama, ‘Sooryavanshi’ with Katrina Kaif. The film will also see cameo appearances by Ajay Devgn and Ranveer Singh. The charismatic actor also has interesting projects like ‘Laxmmi Bomb’, ‘Bachchan Pandey’ and ‘Bell Bottom’ in his pipeline.

rubbalchauhan April 20, 2020
Previous Article Ayushmann Khurrana Or Tahira Kashyap, Who Is A Better Half?
Next Article Anushka Sharma’s shares a message about the importance of love