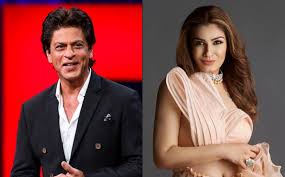 Veteran actor Raveena Tandon ruled 90’s era with her tremendous acting.She was the most celebrated and talented actress in 90’s. She gave hit movies such as Mohra, Dulhe Raja, Andaz Apna Apna and many others. In her acting career, she had romanced with  Amir Khan, Govinda, Akshay Kumar, Sharukh Khan and many other A list actors.

Recently, in a magazine interview she was asked to choose one co star with whom she want to reunite on silvet screen. The Mohra actress told that she is keen to reunite with Sharukh Khan. She told the magazine that she got many opportunities to work with bollywood king khan but due to some situations they were not able to work with each other.
They signed 4 movies together but ended up working only in one movie i.e. ‘Zamana Devana ‘. Raveena also revealed that she was approached for ‘daar’ and also for ‘chaiyya chaiyyan’ but she could not because she was making a comeback.
On the work front, Raveena will be next seen in K. G. F Chapter in which she play a pivotal role. This movie will be released on 23rd October 2020.
rubbalchauhan March 23, 2020
Previous Article Deepika Padukone is learning to play piano amid self-quarantine period
Next Article Deepika’s ‘film Chennai Express’ character is Ranveer Singh favourite movie Character