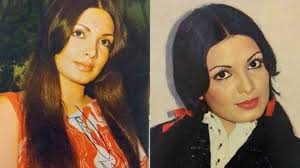 Parveen Babi was one of the true beauties in Indian cinema with charming personality. The actor made her debut in Bollywood with 1973 with ‘Charitra’ opposite cricketer Salim Durani and made a mark on every heart with her acting. She became a sensation very early in her career and gave hits like ‘Deewar’, ‘Namak Halaal’, ‘Amar Akbar Anthony’ and ‘Shaan’.

Her glamorous avatars in the 1970s also earned her much admiration from the fans who loved her dancing and the way she expressed emotions on the big screen. She was the first Bollywood star to appear on the front page of Time Magazine in July 1976. She was also the first female superstar of Bollywood.

In her career, she had worked with many male superstars. In fact, Amitabh Bachchan  and Parveen featured in several movies.

Her popularity among the youngsters of that time made her among the most popular actresses in Bollywood of that time. She was on the cover of every film magazine.

Along with her huge success, she was also battling the mental health issues at that time. There wasn’t so much awareness about mental health and it was considered a taboo.

Parveen was found dead in her Mumbai apartment on January 22, 2005 after her society members told the police that she had not collected her milk and newspapers for 3 days.

The police suspected that Parveen may have been dead up to 72 hours before her body was found. The police ruled out any foul play in her death and it was said that she died due to organ failure.