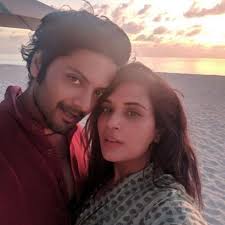 ‘Fukrey’ actor Richa Chadha and ‘House Arrest’ actor Ali Fazal wedding, started doing the rounds on the Internet. The couple’s wedding will take place in the third week of April. According to the report, Richa and Ali, who have been dating for over four years, will get married in New Delhi and will later host a grand party for their Bollywood friends in Mumbai.

“The two first met on the set of Fukrey in 2012 and have been friends ever since. They started dating in 2015 made their relationship public in 2017 and now, they are all set to take the big leap. The wedding will happen in Delhi among close family and friends. The festivities will go on for two days,” revealed a source.

The couple is reportedly planning to go unusual with their wedding festivities. Talking about the wedding venue, the source said, “The duo are working round the clock with their teams for interesting, unconventional venues and celebration ideas. The party in Mumbai will most likely be at a venue by the sea or in an experiential venue, something like a performing center, which is a break from the usual venues.”

On the work front, Richa Chadha will next be seen in ‘Bholi Punjaban’ while Ali Fazal’s next release is ‘Death On The Nile’.