And now Punjabi cinema is growing day by day and many actors and filmmakers started their careers in the Punjabi film industry, they are touching the heights of success. The two faces among them are “Gippy Grewal and Sargun Mehta”.

“Gippy Grewal” is one of the most popular personalities in the Punjabi film industry. He has tried his hand in different -different things including singing, acting, directing, etc and excelled in it all as a singer and actor, there are many projects in which Gippy did a great success. But soon he has changed into a great actor and today he is known as the superstar of Punjabi  Cinema.

“Sargun Mehta”‘ began her career with the theatre shows when she was in her college, Delhi, she has performed in several theatrical programs. But Later on, she gets selected for the supporting role in Zee TV’s 2009 television programme 12-24 Karol Bagh and now she is one of the famous stars in Punjab film industry and has a versatile talent. She has won five Best Actress Awards in her past five years. 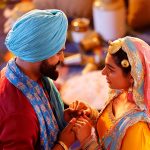 Popular Punjabi singer-lyricist Jaani was hurt in a car accident, “I witnessed death and God today”