Shah Rukh Khan appears in a series of images that are being referred to as his leaked first-look from Brahmastra, his arms outstretched and covered in blood. Although it’s difficult to tell whether the images, which are currently going viral on Twitter, are real or false, they do depict the actor as the Vanarastra character from Ayan Mukherji’s movie. The Brahmastra teaser previewed the persona, a superstar with a Hanuman-like apparition behind his back, without identifying the actor playing the part. Previously, Brahmastra: Part One – Shiva director Ayan Mukherji has dismissed Khan and Deepika Padukone’s involvement while leaving the door open for a future instalment. According to repeated rumours, the actors will play significant franchise roles. A superhero fantasy movie starring Ranbir Kapoor, Alia Bhatt, and Amitabh Bachchan is titled Brahmastra and the movie is the first ever collaboration of the real life couple Ranbir and Alia. The love song “kesariya” and latest song “Deva Deva” has received millions of praises and is trending highly on internet. Kesraiya was called as the love song of Ranbir and Alia and while the song was released in a live vedio, it was revealed by Ayan that there are many more songs about which the duo also don’t know and this has definately been a bomb dropping moment.

The high-profile film will premiere on September 9. In the meantime, Khan recently made a cameo role in Laal Singh Chaddha, which starrer Aamir Khan and Kareena Kapoor Khan. The titular character instructs the actor, who plays a younger version of him, how to strike a posture. Shahrukh Khan is also making a cameo appearance in Salman Khan’s upcoming most awaited venture which is a sequel of Ek Tha Tiger. He also made an debut in R Madhvan’s Rocketary- The Nambi Effect. Well the recent look is not yet figured out to be true but if this is the actual look, this definately is a delight to fans. 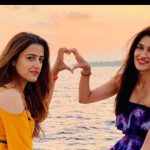 Kriti Sanon and Nupur Sanon, the siblings who break stereotypes. Read to know more.
Next Article 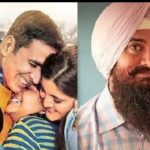