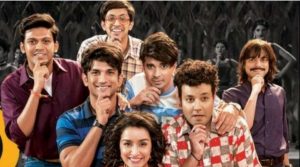 After opening with a decent amount of Rs 7.32 crore at the box office, Chhichhore gained momentum over the weekend and crossed Rs 35.98 crore-mark on Sunday. The Sushant Singh Rajput and Shraddha Kapoor film is doing good at multiplexes as well as in tier 2 and tier 3 cities and is expected to cross Rs 50 crore in the coming days.
Helmed by Dangal director Nitesh Tiwari, Chhichhore hit screens on September 6 and is running steady at the box office. It collected Rs 8.10 crore on Monday. Tuesday, being a holiday for Muharram, could prove beneficial for Chhichhore.
Chhichhore is a campus drama divided into two parts- the first part is set in the 90s, while second is set in the current times. The film is about seven college buddies who are now busy in their respective lives and reunite to relive their good old college days. The film goes in retrospection and we see these friends in their engineering college doing everything but study.

The friends, played by Sushant Singh Rajput, Shraddha Kapoor, Varun Sharma, Tahir Raj Bhasin, Naveen Polishetty, Saharsh Kumar Shukla and Tushar Pandey, call themselves ‘Losers’ and participate in an inter-college sports championship. The film reminds you of 3 Idiots and Jo Jeeta Wohi Sikandar in parts, but one should not expect a lot from this campus drama.

Chhichhore is filled with some out-of-the-box and some clichéd punchlines that will remind you of your college days and your ‘kamine’ friends. Though the film received mixed reviews from critics, audiences seem to have liked the film as is suggested by the ringing cash registers at the box office. Film trend analysts credit it to word of mouth publicity and the nostalgia factor attached to the film.

But those who just want to have a good time with their family and friends and come out feeling entertained should definitely catch Chhichhore.