Sapna Choudhary who is a popular Haryanvi dancer has been booked by the Delhi police wing in a case of cheating. A talent management company has accused popular Haryanvi artist Sapna Choudhary of cheating and breaching terms of agreement. After these accusations, the artist was booked by the Delhi Police’s Economic Offenses Wing.

Apart from Sapna, her mother, Neelam, her siblings Shivaini and Karana along with her sister-in-law, Rachna, have been booked by the police. According to reports, the FIR registered states that the Complainant PR company has made career of many struggling artists. Sapna was one of those artists.

Back in the year 2018, the accused Sapna, through a common friend, approached the Complainant PR Company.

The company initially did not show any interest in working with her. Later on the artist again came with some common acquaintance to the company. She was accompanied by her mother, brother, sister and sister in law, who requested Complainant Company to do something for Sapna.

Eventually, the company agreed and an agreement was signed between them.

Sapna took money for a stage show and did not perform in it. The company also alleged that Sapna breached the agreement of the contract. 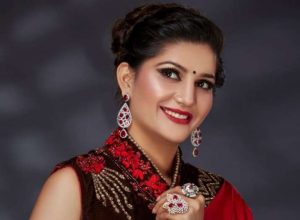 Sapna Choudhary started as a local dancer. She had little popularity in rural area of western UP, western rural area of Delhi, Bihar and Haryana. And made her bollywood debut with an item number ‘Hatt Ja Tau’ in Veerey Ki Wedding. She also featured in ‘Tere Thumke Sapna Choudhary’ from Abhay Deol starrer ‘Nanu Ki Janu’ and a song titled ‘Love Bite’. She rose to fame from her popular Haryanvi song ‘Teri Aakhya Ka Yo Kajal’.

Sapna will soon be served a notice to join the investigation.