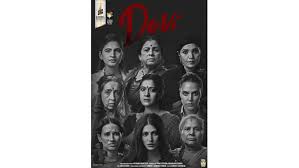 Kajol is celebrating the release of her first short film ‘Devi’ with the film cast. On Monday, a special screening of the film was organised in Mumbai. Kajol shared a selfie from the film’s premiere on Instagram. In the selfie, Kajol can be seen posing with ‘Gabbar Is Back’ actor Shruti Haasan,  Neena Kulkarni who had done movies like ‘Hungama’ ‘Bhootnath’ ‘Mogra Phulaalaa’, Shivani Raghuvanshi ‘Titli’ actor and others.

Kajol captioned the post: “Team Devi. She is all of us. One more for the women’s club.” The screening was attended by Kajol’s close friends Karan Johar, Sonali Bendre and others.

Kajol looked pretty in a yellow dress as she smiled for the cameras at the venue of the screening.

Karan Johar, who was present at the screening, praised the film on Twitter, by quoting, “This really moved me. Such tremendous nuance and layered subtexts. A terrific ensemble of actors. Please watch this solid short Devi. Huge congratulations and big love to my friends Niranjan Iyengar and Ryan Stephen.”

Speaking of the film, Kajol, recently in an interview said, “I think you definitely need to raise your voice. I don’t think you need to be so very vehement about it but I do believe we all need to start up and debate. Don’t scream about it, yell about it. But talk about it. Make your statement in the most logical, practical manner possible. That’s where we are lacking.”

‘Devi’ is a story of nine women who operate the sisterhood that has been drive upon them by circumstances. The short film is directed by Bengali film actor Priyanka Banerjee.