Kangana Ranaut might be getting embroiled in a new controversy with every passing day, but that is not deterring her from continuing her work. 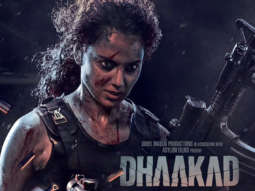 The actress had recently wrapped up the shoot of Thalaivi and has now begun shoot for her upcoming film Dhaakad, where she would be seen doing intense action sequences. The makers of Dhaakad have now revealed the release date as well along with a new poster.

Dhaakad is a female-led action thriller directed by Razy Ghai. Kangana Ranaut shared a new poster of Dhaakad in which she features as Agent Agni. Kangana Ranaut looks fierce and fearless and she looks amazing.

Kangana Ranaut herself shared the news through a post on her social media. Tagging the film as the first female-led action thriller film of not just Bollywood but of India, she wrote, “She is fearless and Fiery! She is Agent Agni. India’s first female led action thriller, #Dhaakad releasing in theatres on 1st October 2021!” Dhaakad is being directed by Razneesh ‘Razy’ Ghai. A release on 1st October means it would be getting the Gandhi Jayanti weekend. It was earlier scheduled for release on Diwali 2020, but COVID changed the plans.

Earlier, there had also been news of the film being shelved, but Kangana and her manager and sister Rangoli refuted these rumours. Talking about the film, Kangana has said that it would be a ‘world-class spy thriller’. We are eagerly waiting to see it unfold on the big screens.