Screenwriter Bhavani Iyer is all set to pen the upcoming biopic on third Maharani of Jaipur, Gayatri Devi. Bollywood actress Dia Mirza can’t hide her excitement over the announcement of the biopic. Writer Bhavani Iyer is a very well known name in the field of screenplay writing. She is the  screenwriter of critically acclaimed films like ‘Raazi’, ‘Lootera’ and ‘Black’. Bhavani took to her Instagram and officially announced her next project. She posted a picture of Gayatri Devi and wrote, “It is an incredible pleasure and honour to tell the story of someone so ahead of her times, a leader, an icon of progressiveness, a true feminist and oh, also one of the most beautiful women in the world – the mesmerising Maharani Gayatri Devi. And there’s this amazing bunch of people that I get to know and love, on this journey. @pranjalnk @samkhan @kausarmunir and everyone from #Juggernaut and #MangoPeople.”

Though Bhavani’s post did not reveal the cast of the project but it garnered a lot of attention on social media. Bollywood beauty Dia Mirza expressed her excitement and wrote in the comment section, “So many wonderful people coming together ❤best wishes!!!” Dia was in limelight from the past few days as she got married to Vaibhav Rekhi on February 15. Bhavani was able to make this announcement after she got the rights of the biopic. Earlier in February this year, the writer successfully received the life rights from Maharani Gayatri Devi’s grandchildren, Maharaj Devraj Singh and Rajkumari Lalitya. 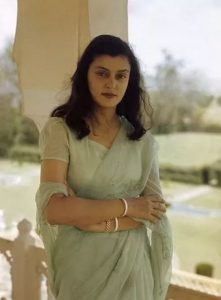 Maharani Gayatri Devi was considered as one of the most beautiful women in the world. She was listed among the ”World’s Ten Most Beautiful Women” by Vogue magazine. The London-born princess of Cooch Behar was a fashion icon as she was known for her style and charisma. She was a celebrated name in the Indian history and was the third queen (Maharani) of Jaipur from 1939 to 1970. She was married to Maharaja Sawai Man Singh II. In 2009, Gayatri Devi breathed her last at 90.