Well, Salman Khan and Alia Bhatt’s film Inshallah created a buzz in audience even before its first look . Audience are excited to watch Alia and Salman together on screen. Moreover, fans are also eager to watch the collabration of Sanjay Leela bhansali and Salman Khan after two decades. But if we talk about recent repots of Spotboy, Salman Khan has backout from Inshallah  Shortly before the shooting started, this news has given a big shock to the fans. According to sources quoting the report of Spotboy, Salman had promised 125 days to Sanjay Leela Bhansali’s film Inshallah. Also, Salman wanted to release Inshallah on the occasion of Eid. 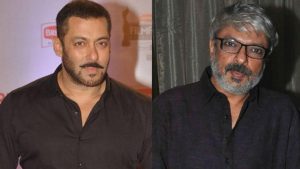 According to media reports, Salman did not like this thing of Bhansali. However, Salman has also made it clear to Bhansali that the reason for leaving his film is not the release of the film on the occasion of Eid. Rather, they have given dates to other projects as well, so it will not be possible for them to give Inshallah more than 175 days. Apart from this, sources also told Spotboye that Salman was interfering more in the film, which Bhansali did not like. After this, Bhansali has also decided not to make Inshallah.

But there is not any official annoucement from the side of Sanjay Lela Bhansali, and Salman Khan as well. So ,let’s see Inshallah will be made or not.