Netflix released the trailer of late actor Irrfan Khan’s 2017 film, Doob: No Bed of Roses.  The Bengali-language film has been officially released on the streaming platform.

Doob: No Bed of Roses is a Bangladesh-India co-production drama, which was originally released in the year 2017. It is directed by Mostofa Sarwar Farooki and features Late Irfan Khan in the lead role. Khan is seen playing the role of a filmmaker whose one decision brings both, chaos and love, in his life and his family’s life. The film also stars, Nusrat Imrose Tisha and Parno Mitra. Doob: No Bed of Roses was Bangladesh’s official entry for the Oscars. The director Mostafa brought a real-life event from his country to the screen. The film has already done the rounds of several film festivals. It is produced by Jaaz Multimedia of Bangladesh and Eskay Movies (of India) and co-produced by Irrfan Khan.

In the trailer, Irfan is seen stepping into the shoes of a filmmaker named Javed Hassan who goes through a broken marriage and also has an affair with daughter’s friend which is too much for a middle-aged man. As an audience we see, Irfan as a confused and lost character who is constantly trying to sustain all the mishap in his life. 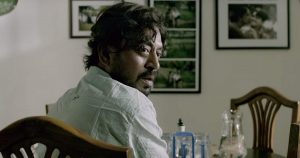 Khan battled neuroendocrine tumour for around a year and received treatment in the UK. At the age of 53, he took his last breath on April 29, 2020.

Speaking about working with Irrfan Khan, the director said “I still remember when I went to Irrfan’s house in Mumbai to discuss the script and his character, we ended up chatting about everything other than the film. From nature, childhood, mother, dreams to cricket, we spoke about everything other than cinema. Later, I realised maybe that was his way of getting to know people.”

The movie was initially banned in Bangladesh, as it was reported that it was loosely based on late Bangladeshi writer and filmmaker Humayun Ahmed. The filmmaker clearly denied that it was a biopic and the film later received a ‘No Objection Certificate’ from the Bangladesh Film Development Corporation 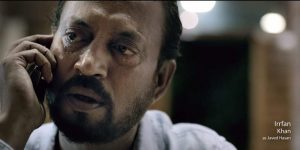 After watching the trailer, the fans are yet again amazed by Irfan’s inimitable, magnetic screen presence. He truly seems to be true to his character. The film is not just a treat for movie buffs but also an emotional reminder of Irrfan’s brilliance. Cinephiles are excited to see his performance through this dark award-winning movie which has finally arrived on Netflix.