Lock Upp, a show hosted by Kangana Ranaut and produced by Ekta Kapoor, has been generating maasive news since its premiere. The show has gain huge amount of fan base. The reality programme has quickly reached the top ranks, with each episode including more exciting incited content than the preceding. A stay on the series has been ordered by a Hyderabad court, just days before the series’ finale. In reality, the court has barred Ekta Kapoor’s AltBalaji, MX Player, and Endemol Shine from airing the show on any electronic medium, OTT platform, social media, or other platforms, according to the court’s decision. The XI Additional Chief Judge of the Hyderabad Civil Court issued the stay order after petitioner Abdul Haleem Baig aka Sanober Baig asserted that the show is based on the manuscript of his concept, ‘The Jail.’ After conducting a trial and scrutinizing the petitioner’s documents, the court determined that Baig appears to be the sole owner of the idea and manuscript for the concept known as “The Jail.” It is to be noted that this is Baig’s first court appearance. The Telangana High Court had prohibited the show from being released or published by overturning the trial’s court injuction.Despite the verdict, the petitioner contended that Pride Media owned the concept.
Sanober commented on the incident, saying, “I was taken aback when I saw the show’s promo. I’ve known Endemol Shine’s Abhishek Rege for a long time and we’ve met several times in Hyderabad to discuss the matter. We’ll get started as soon as the market recovers, he assured. The show is not only comparable to our concept, but it is an exact replica of it. I couldn’t believe someone could plagarise the notion so thoroughly. We filed a copyright infringement complaint with the court and were granted a stay.” 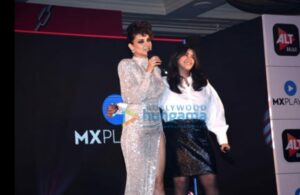 Rajkummar Rao to begin to shoot for second schedule of the Hindi remake of...