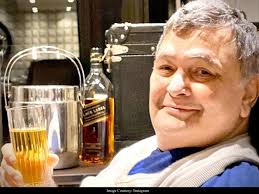 Two days after veteran actor Rishi Kapoor’s death, his wife and actor Neetu Kapoor shared an emotional farewell post for her husband on Instagram. Neetu Kapoor posted a throwback picture of Rishi with a drink in his hand, on her Instagram .  She wrote: “End of our story.”

Rishi died at the age of 67 in a Mumbai hospital on Thursday. He was diagnosed with cancer two years ago and flew to New York for treatment. He returned to Mumbai last September after having spent nearly a year in the US.

A statement released by Mr Kapoor’s family , revealed that the actor remained in his “jovial” self till the very end  “doctors and medical staff at the hospital said he kept them entertained to the last.” Neetu Kapoor shared the statement on her Instagram.

Rishi  is survived by his wife Neetu Kapoor, son Ranbir and daughter Riddhima. His last project was the 2019 film ‘The Body’. The actor had also signed a project with Deepika Padukone, which was to be a remake of Anne Hathaway and Robert De Niro’s ‘The Intern’.