Home Latest Buzz Esha Deol: I decided to cut down on films because I wanted... Esha Deol had been very active in the 2000s since her acting debut in Koi Mere Dil Se Poochhe in 2002. Every year after that, she had multiple releases, but since 2011, she has reduced the number of projects she took on. When you ask her why, she says it’s to focus on her personal life. 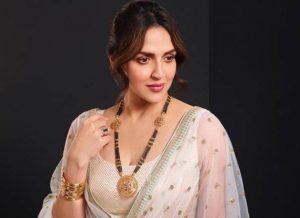 “It was conscious on my part. I sort of wanted to settle down with Bharat (Takhtani, husband) and start a family. I just fell in love and was enjoying that so much, Then I went the family way, and when your babies are very small, everything has to be given the right focus. You have to do the right things at the right time,” the 39-year-old tells us.

The actor believes that settling down and starting a family is important for women. “important”, however, she is quick to add that she believes in the sentiment of “Once an actor, always an actor.”

She is now back to her job, and will be seen with Ajay Devgn in his web debut, Rudra. Deol says she has seen the original show Luther, of which Rudra is an Indian adaptation. “I have enjoyed Luther as a viewer, and it is a fantastic setup. Working again with Ajay is something I totally look forward to,” she gushes. Aside from landing a juicy web project, she has also dabbled in production with Ek Duaa, which recently debuted on an OTT platform. She claims that becoming a producer came naturally to her.

“I was offered the script to act in purely, but I was really moved with the story. I think being a mother and daughter, there was something that deeply touched me when I heard this script. I felt just acting in a film like this was not going to satisfy me. I wanted to do more, especially with a subject like this. I thought ‘what if I could produce it’, and that’s how it happened,” she says.

When Sanjay Dutt spoke about how a jail mate’s advice about ‘having no hope’...