Bollywood actor Fardeen Khan’s comeback movie Visfot, which also stars Ritesh Deshmukh, is said to be hitting the floors in October. The movie is to be directed by Kookie Gulati. For a while now, Fardeen Khan had disappeared into thin air, but he made it into the news last year when he was spotted outside the office of casting director Mukesh Chhabra. After which the rumours of the actor’s comeback with one of Sanjay Gupta’s projects did round.

Recently, it was made official that Fardeen Khan will be making his comeback with the thriller movie Visfot which co-stars Riteish Deshmukh in the lead as well. 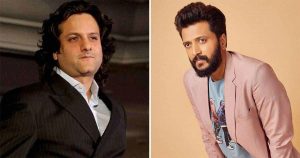 According to the latest reports, Producer Sanjay Gupta has finalised the entire cast and is all set to take the films on the floor next month.