Farhan Akhtar’s appearance in Ms. Marvel has been confirmed after months of speculation. The actor-director will make his Marvel Cinematic Universe (MCU) debut in the Disney+ series under Marvel Studios’ umbrella. 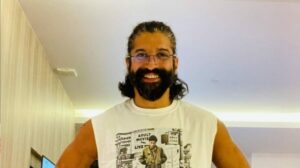 Deadline broke the news of his inclusion in the Marvel series. Farhan will appear in a ‘guest-starring role,’ according to the foreign outlet, but no other specifics regarding his character have been published. While Farhan is a welcome addition to the series, fans are also looking forward to seeing Fawad Khan. Fawad had previously stated that he will appear in the season. On June 8, Ms. Marvel will make her debut. Fawad revealed his involvement in the Marvel project in an interview with Film Companion. “I am,” he says. “I can’t refute,deny or lie about it as they themself have revealed the news ,” he stated. The Ms. Marvel trailer debuted Iman Vellani as Kamala Khan, aka Ms. Marvel, earlier this year. The teaser showed Kamala dealing with obstacles that teenagers encounter, such as mean classmates, boy problems, and the pressures they face to organise their life and dreams right now. As she tries to make sense of her existence, she is given an amulet that grants her superpowers and transforms her into Ms. Marvel. The series will follow the teenager’s adventure through a variety of challenges, both superhero-related and otherwise. Keeping up with our thinking caps on, we’re eager to find out who Farhan will portray in Ms. Marvel!
Farhan has always proved that he is a versatile actor. His performances have special place in audience’s heart and hence the massive breakyhrough of this news have made fans hoot for their favourite star to come once again, and suprise the audience with his versatile acting skills and his natural performance which automatically shines out.