Home Uncategorized Following the success of ‘Bottoms Up,’ Rupali Suri has landed a role... Rupali Suri rose to prominence in 2016 after appearing in Bharat Dabholkar’s play ‘Bottoms Up.’ The actress received plaudits for her performance as Sonia Gandhi, shifting from a sassy security guard. Years down the line, Dabholkar and Rupali have reunited for another project, this time for a movie. 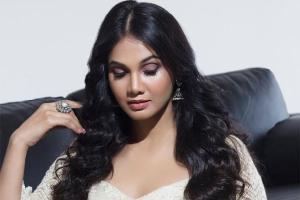 “Bottoms Up was a massive hit,” Dabholkar stated of his partnership with the actress. Shiamak Davar, Javed Jaaferi, Arshad Warsi, and Shahid Kapoor were among those who benefited from it. We had numerous skits, songs, and dances, and each performer didn’t even get time between each character and costume change because of the format. Rupali’s acting abilities were put to the test when she entered as a security guard, excited, and returned as Sonia Gandhi. After a dance scene, the actress appeared as a Gujarati housewife, bringing her acting skills into action once more.” Bharat, who has been focusing on a variety of projects with the actress, including a trilingual feature, expressed his delight at the prospect of working with her again. He stated, he was planning a three-film sequence in Birmingham just before lockdown, motivated by the reaction to our theatrical endeavours. I knew I needed a devoted actor like Rupali at that point. She has a commanding presence on screen. When you’re a character actor, you can fit in with anyone, but when you’re a lead with a strong personality, you’ll have to work considerably harder to switch personalities in a matter of microseconds. It necessitates a great deal of dedication in addition to performing abilities. That is what distinguishes Rupali from the rest. Dabholkar’s upcoming projects include a collaboration with Mohit Suri and a Marathi web show.

Rupali Suri is a well-known Indian actress and model. Her portrayal as ‘Bablie’ in “Hero Bhakti Hi Shakti Hai” made her famous. Natasha Suri, her sister, is also a well-known Bollywood actress.

Movie ‘Jai Bhim’ has been featured on Oscar YouTube Channel.