Year 2020 saw the release of many powerful women oriented films like Gunjan Saxena: The Kargil girl , Shakuntlala Devi, Thappad to name a few. And now in 2021 you can definitely expect another solid set of female centric films. Some of them are : Sanjay Leela Bhansali has roped Alia Bhatt for the adaption of the Novel ‘Mafia Queens of Mumbai’ by Hussain Zaidi. The film would narrate the life of Gangubai Kothewali, the famous Madam of a brothel in Kamathipura. The protagonist was sold off to prostitution by her own boyfriend, later she tremendously struggled in her life and ensured the well being of sex workers. Bhansali has earlier done magic with heroine-oriented subjects in Khamoshi (Manisha Koirala), Black (Rani Mukerji) and Padmaavat (Deepika Padukone). Even Devdas was more the ladies Madhuri Dixit and Aishwarya Rai Bachchan’s film. The film is expected to be released around Diwali. 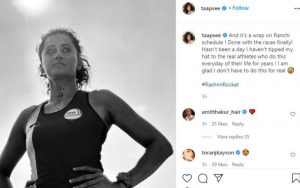 It’s yet another sports drama starring Tapsee Pannu which has the direction by Akash Khurana. The movie evolved around a sprinter from small village in Gujarat. Taapsee underwent a major transformation (physical) to play the role for this movie. The actor recently took to Instagram to share the news that she wrapped up Ranchi schedule for her upcoming film. She wrote a beautiful caption with a picture. Kajol has done the maximum number of author-backed roles in recent times, from Dushman  to Helicopter Eela in 2015. In Tribhanga, Kajol has the luxury of being the producer . She also has a very talented woman Renukha Shahane to direct her. The last time Kajol was directed by a woman –it was Tanuja Chandra in Dushman—was also the first time. In Tribhanga, she will be joined by two other very talented actresses. But but but… don’t mistake, it’s all about Kajol being the main one …This is Kajol’s film all the way. It is to be released on 15 January on Netflix. The queen girl, Kangana will be seen in another biopic which is based on the life of Tamil dancer, actor and politician J.Jayalalithaa. The film will obviously be in Hindi, Tamil and Telugu as well. Kangana will be seen portraying six time chief minister of Tamil Nadu. The film is directed by A.L Vijay. Further the teaser of the movie was released in November 2019 where she astonished her fans as she looked unrecognizable with her transformation for this role. The film was to be released in 2020 but due to COVID pandemic it is stretched to 2021. It is an upcoming Indian Hindi-language political drama film directed by Subhash Kapoor. The film stars Richa Chadda in the lead role. The film’s official announcement was made by Chadda on 12 February 2020. Richa plays the woman from a weaker section of society who rises to the ranks of the state Chief Minister. One of her costars said that  “It’s a showcase for her. We men are mere props.” About time! Women have played props in Hindi cinema for decades. It is all set to be released on January 22.