Godzilla vs Kong trailer: Despite the somewhat predictable narrative, it is hard not to get enraptured by the huge beasts. As the synopsis rightly puts it, they do appear to be “mythic”.

The Godzilla vs. Kong trailer has arrived in English, Hindi,Tamil, and Telugu. Warner Bros Pictures unveiled a two-minute trailer for the monster mash-up on that gives us monster mayhem as the two titular beasts go head-to-head. While the two fight it’s what audiences are here for in Godzilla vs. Kong , the human characters attempt to explain why this is happening and give the film narrative reasoning… But do so they must, because Godzilla vs. Kong is part of an ongoing storyline called the MonsterVerse that started with 2014’s Godzilla, before re-introducing the ape in 2017’s Kong: Skull Island. 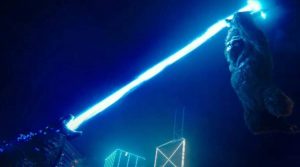 The Godzilla vs. Kong trailer reveals that Kong has made a connection with a human child called Jia (Kaylee Hottle), further the synopsis adds — with whom he has formed “a unique and powerful bond”. Godzilla finally shows himself and dukes it out with the unchained Kong on top of an aircraft carrier. Their fight is scored by Chris Classic’s 2019 hip hop track “Here We Go”.

But Godzilla isn’t actually a villain, the Godzilla vs. Kong trailer goes (he was the hero in the two previous MonsterVersefilms, after all) as the returning Madison Russell (Millie Bobby Brown) — from 2019’s Godzilla: King of the Monsters — notes: “There’s something provoking him that we’re not seeing here.” Atlanta star Brian Tyree Henry’s new character agrees (or so the trailer suggests anyway), before we cut to a shot of Kong. Hall’s Andrews reveals there was a war in ancient past, and that Godzilla and Kong are now the last ones standing. The Godzilla vs. Kong trailer also reveals how the match-up will be balanced. Godzilla’s atomic breath might prove too much for anyone, including a giant ape, so the film has given him a mighty weapon that can seemingly block, harness, and channel the power of the atomic breath. It looks like an axe, I think.