Home Gossips He is married to his work right now: Jackie Shroff on Tiger... On Tuesday, social media  flooded with birthday wishes for Bollywood actor Tiger Shroff. His ardent fans sent their lovely wishes to the Baaghi actor. Meanwhile Tiger’s dad and veteran actor Jackie Shroff has reacted to the wedding rumours of Tiger with his alleged girlfriend Disha Patani. Handsome hunk Tiger Shroff and Bollywood beauty Disha Patani have been surrounded by dating rumours since they collaborated in the music video Bifikra. The rumoured couple have won millions of hearts with their chemistry and phenomenal dance moves in the video. After the video they reunited in Ahmed Khan’s Baaghi 2, which added fuel to rumours. However both the actors have clarified that they are only good friends. In a recent interview with Hindustan Times, Jackie Shroff was asked about the wedding plans of the Baaghi star. Senior Shroff replied to the question and said, “He is married to his work right now. I don’t think he is going to defocus because once he focuses on something then he has a laser like focus. If he gets married, I know he will be going to focus on that.” 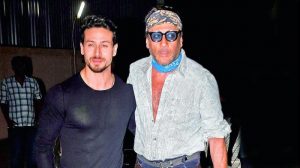 On Tuesday, Tiger will be celebrating his 31st birthday. Jackie also talked about Tiger’s birthday plans and said, “I usually plant a tree in his name, and my boy would have planned something for himself, his mother and the little baby Krishna. I have a shoot that day, so they must have planned something in the evening, probably a dinner at home.” Senior Shroff further added, “He was a dreamer as a kid and he is still a dreamer, dreaming of his work and his health. He is just focused on things that he feels is the right thing to do at this time. It is nice that little kids love him so much. I get so happy when I meet kids and they say ‘He does this so well’, ‘How did he make a six pack’, and ‘What does he eat’.”

Jackie also talked about the achievements of his son and said, “I am happy that he has turned out to be beyond my imagination. I always knew that he would be good at anything (he tries).”

Meanwhile, Tiger has Baghi 4, Heropanti 2, Ganapath and Rambo in his kitty. He is married to his work right now: Jackie Shroff on...