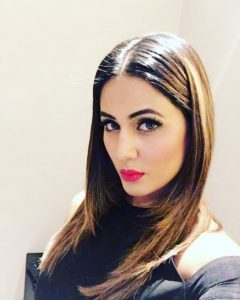 The popular TV serial Kasauti Zindagi’s 2 Fame actress Hina Khan has started shooting for Vikram Bhatt’s film.  However, it is too late to start shooting.  The film was to go on the floor in June itself.  Earlier, Hina Khan told that she has taken a break from the serial for the film.  With this, she said that she will return to the show in September.  The actress has given information about the film’s start on social media.
Hina has posted her selfie on Insta Story.  In this, she is seen sitting in the car in a no makeup look and is going towards the film set.  She wrote in the photo caption, “Good morning, new beginnings, wish me luck, let’s start @ Vikram Bhatt.” In addition, Director Vikram Bhatt shared a picture of a chair on Instagram account.  The director has written on the chair.  However the spelling of the director is wrong and Vikram has also told in the photo caption that the spelling has gone wrong.  With this, he has written the first day of shooting. 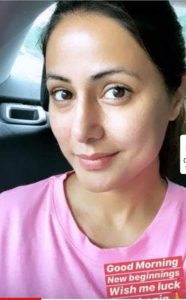 During an interview, Vikram Bhatt explained the reason behind signing Hina Khan in the film.  He had said- “I think there is something in Hina for the film that is very attractive.”  They are a mixture of sensitivity and class.  The pictures on Hina’s Instagram are quite classy.  He is a good actor.  She will play the role of a fashion magazine attendee in the film.  I think Hina is fit for my film character.
Significantly, Vikram Bhatt is known for making horror films.  His last film 1921 was released in January last year.  But this film could not do anything special at the box office.  Apart from this, he has directed films like Raj Reboot, Love Games, Bhaag Johnny, Mr. X.