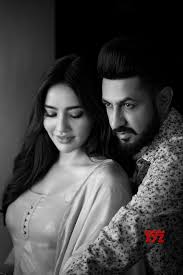 Lyrics of ‘Dil Todan Walya Nu’ song are written by Happy Raikoti who had also written songs like ‘Zinda’, ‘Jaan Ton Pyara’ and others.

The song starred Punjabi singer and actor Gippy Grewal and Bollywood actor Neha Sharma making her first debut in the Punjabi industry in the lead role. The movie has been directed by Rakesh Mehta & produced by Bally Singh Kakar under the banner of Golden Bridge Films & Entertainment Pvt. Ltd.

From an audience point of view, this video song is an emotional track of Gippy Grewal who has recently faced heartbreak in the video. The song conveys the story of Sandhu  (Gippy Grewal) who confronts the pain of being cheated in a relationship and says who so ever does this will face the punishment in return.

I personally think Gippy played the character with complete perfection in the ways of his expressions and emotions were very convincing and the audience just can’t wait to watch the complete movie as soon as possible.

‘Ik Sandhu Hunda Si‘ will hit the silver screens on 28th Feb 2020 & worldwide distribution of the film will be done by Omjee Star Studios.