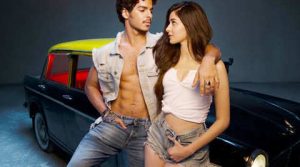 Ali, who is producing the film, shared the news on Instagram on Wednesday.

“It begins,” the producer wrote alongside the clapboard of the project.
Ishaan took to the photo-video sharing app to mark the beginning of the shoot.
“Alright guys, tuning in! (And out of Instagram for now) See you on the other side!” the young actor wrote.

Directed by Maqbool Khan, Khaali Peeli is set in Mumbai and promises to be a “young, edgy roller-coaster ride that kick-starts one night, when a boy meets a girl”.

Ali, best known for directing blockbusters such as Sultan, Tiger Zinda Hai and Bharat, has joined hands with Zee Studios to co-produce the film.

Also starring Jaideep Ahlawat, the film is scheduled to be released on June 12, 2020.