Home Latest Buzz It Was A ‘Ramayan’ Reunion Of Sorts When Reel Life Lakshman And... 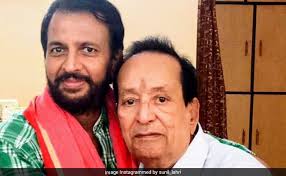 Sunil Lahri, who famously starred as Lakshman in Ramanand Sagar’s ‘Ramayan’, shared a picture on his Instagram profile on Saturday. Well, it also features veteran actor Arvind Trivedi, who played the role of Ravan in the mythological series.

In his post, Mr Lahri revealed that the picture was taken during Christmas and he captioned it: “Quality time spent with Arvind Trivedi(Ravan)on Christmas. Got his blessings and advice. Very intelligent and nice person. Consider myself lucky to work with him.”

Last week, Dipika Chikhlia Topiwala who starred as Sita in the show, shared a throwback picture with the entire cast of the show, which spread like fire on social media. The caption on the post read: “Epic pic of the entire team of ‘Ramayan’ cast and crew. Sagar saab with his son and below them are the direction team and camera team … Barring Ravan, almost all were there. Only when we look back, do we know what all we have left behind. So many of the cast no more. RIP to them all.”

Ramanand Sagar’s ‘Ramayan’, which was a Sunday morning staple in the Eighties, returned to TV last month. The show that featured Arun Govil as Lord Ram, Sunil Lahri as Lakshman, and other prominent actors, airs on DD National twice a day. The show resonates with today’s generation even today.