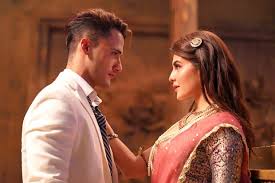 ‘Bigg Boss 13’ contestant and runner-up Asim Riaz and  Jacqueline Fernandez have started shooting for their music video, and the two seem pretty excited about it.

Asim shared a video and a photo of himself with actor Jacqueline. The video revealed Asim and Jacqueline look for their upcoming music video. Asim also said, “the song would be a fun Holi number.”

Asim Riaz also murmurs a line from the hit song “Mere Angne Mein”, hinting that the video featuring him would be a remix of the song which was originally picturized on Amitabh Bachchan in 1981 film ‘Laawaris’.

Jacqueline also shared a photo of herself with the former ‘Bigg Boss’ contestant and captioned it, “So excited!!!” In an earlier statement, she had promised “the music video is going to be a visual treat for everyone.”

Talking about the music video which will be directed by ‘Sanam Teri Kasam’ director Vinay Sapru,  T-Series head honcho Bhushan Kumar had said, “The song is a traditional folk song, which Tanishk Bagchi has modernized and added his own unique twist to it. I have always enjoyed folk songs and want the younger generations to get familiarised with them. The song is going to be a huge hit, and I cannot wait for everyone to hear it.”

Apart from the music video, Asim Riaz will also be seen with Punjabi singer, actor  Himanshi Khurana in a music video. He is also collaborating with rapper Bohemia for another music video.