Home Gossips Janvhi And Sara to embrace the Koffee Couch this season? After creating a lot of mysterious and speculations and keep all of us in suspense, it has finally been revealed that Koffe With Karan’s new season will be back on Disney Plus Hotstar and not on Television and the show will be hosted by none other than the filmmaker Karan Johar returns. Fans have been wondering about the celebrities who 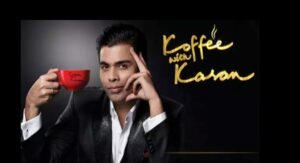 will grace the iconic Koffee with Karan couches since his announcement. While it was earlier claimed that Allu Arjun and Rashmika Mandanna would appear in an episode, a new source indicates that Sara Ali Khan and Janhvi Kapoor will appear on the show together. Off-camera, Sara and Janvhi are good friends. Last year, the stars travelled together and appeared together on Ranveer Singh’s game programme The Big Picture. If they do appear on the show together, it will be their first appearance together on Koffee With Karan.
The two young actors, Janhvi Kapoor and Sara Ali Khan, will appear together in one of the early episodes. The two have been on vacation and sharing plenty of hangout videos on social media, and it’s this relationship that Karan Johar and the team hope to explore in this entertaining episode. According to the sources,”this episode will premiere sometime in June 2022.” Sara previously starred on the show with her father, Saif Ali Khan, and Janvhi with her half-brother, Arjun Kapoor. With the announcement of Koffee With Karan’s return, rumours are circulating that the next season will include massive and sizzling stars like Varun Dhawan, Kiara Advani, Anil Kapoor, Neetu Singh, Sidharth Malhotra, Rashmika Mandanna, Katrina Kaif, Vicky Kaushal, Ranbir Kapoor, Alia Bhatt, Ranveer Singh, and Akshay Kumar. While Karan has yet to release the guest list, he has confirmed that filming has begun.He uploaded photographs from the set of the show on Instagram. “Started #koffeewithkaran season 7… I’ve been doing this show for last 18 years now… I can’t believe I’ve been brewing this Kuppa for so long !Thank you so much for your kindness! He shared a photo from the sets and stated, “Watch this space for details ! Karan Johar’s next film, starring Dharmendra, Jaya Bachchan, Shabana Azmi, Ranveer Singh, and Alia Bhatt, is set to release over the Valentine’s Day weekend in 2023, Liger,. Jug Jugg Jeeyo, Brahmastra, , Govinda Naam Mera,Mr and Mrs Mahi and Selfie are some of his productions. He’s also working on a number of projects for the OTT network.