Home Latest Buzz Kangana Ranaut put on 20 kilos for ‘Thalaivi’, will lose it all... 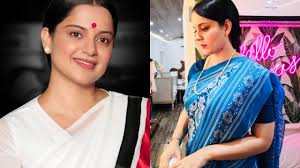 Bollywood star Kangana Ranaut has completed her shooting for her upcoming project  ‘Thalaivi’. She has put on 20kg for that film. However, within two months, she will also have to lose all that weight to get into her characters for her next films ‘Dhaakad’ and ‘Tejas’.Kangana portrays the role of former Tamil Nadu chief minister J Jayalalithaa in ‘Thalaivi’.

Recently, the actor team posted a video from her workout session on Instagram. In the video, Kangana can be seen measuring her weight with the caption, “Issa transformation goal. Kangana Ranaut has 2 months in hand and 20 tough kilos to lose for her fierce character in ‘Dhaakad’! Here’s to her ambitious, goal-oriented, and perfectionist spirit.”

Sharing pictures of Kangana from the film’s sets, her sister Rangoli Chandel tweeted, “Only last schedule to go for #Thalaivi Kangana has gained 20 kgs weight, After 2 months she starts #Tejas & #Dhaakad…. will she be able to shed that weight, let’s see Face with the tongue.”

Speaking of her transformation into Jayalalithaa, Kangana said, “Since I am tall and skinny, and my face is angular, not round, I had to take mild doses of hormone pills to look different. Of course, I also started eating foods that promote weight gain.”

On the work front, Kangana Ranaut was last seen in Ashwiny Iyer Tiwari’s sports drama ‘Panga’, co-starring with Jassie Gill. The actress also has Sarvesh Mewara’s Tejas film in the pipeline, in which she will play an Air Force pilot. She will also be seen in ‘Dhaakad’.