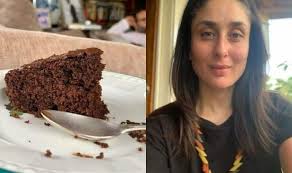 Social media is filled with posts of people trying their hands at baking and relishing on the scrumptious cakes. Sailing in the same boat is Bollywood actress Kareena Kapoor who has recently shared a post about how she is enjoying a chocolate cake baked by her dear sister Karisma Kapoor.

Ever since her debut on Instagram, she has been impressing us time and again with her photos and videos which she keeps on sharing. During the lockdown, this activity became even more frequent and fans got to know what’s up with Veere Di Wedding’ star. On Monday, she shared a praising post for her sister who made her the delicious cake along with few photos which also had Saif Ali Khan at the back.

Taking to the photo-sharing application and sharing the photos, Kareena wrote alongside, “Devouring the best chocolate cake in the world made by the best sister in the world @therealkarismakapoor…  And yes, that’s Mr. Khan being grumpy at the back… zoom in.”

Reacting to Kareena’s post, Karisma commented: “Yay! lockdown has come to good use and I can bake for my family and friends. Alternate profession maybe.”

On Sunday, Kareena shared a few throwback pictures from her vacation with friends, Kareena wrote: “Sundays are for daydreaming and reminiscing the fondest memories. #MissYouGuysALittleMore.”

On the film front, Kareena will be seen opposite Aamir Khan in “Laal Singh Chaddha”, which is an adaptation of “Forrest Gump”, the multiple Oscar-winning film which was released in 1994 and starred Tom Hanks with Robin Wright. While for Karisma, her last film was Dangerous Ishhq, after which she featured in special roles in movies such as Bombay Talkies and Zero.