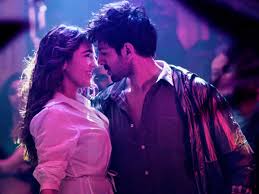 Kartik Aaryan and Sara Ali Khan’s lovey-dovey promotions for ‘Love Aaj Kal’ finally came to end with their film hitting the screens yesterday on 14th February. And while fans are in love with the couple’s onscreen chemistry, several social media users turned the Twitter reviews into a meme. Netizens came up with some hilarious reactions to the film on social media. Here are some memes which will definitely leave you in splits.

Whereas Twitter shared several memes based on the film and they are now going viral. It won’t be wrong to say that the scenes from the movie have started a hilarious meme fest on the site.

One of the users shared a clip from the video in which Sara says the dialogue, “Tum Mujhe tang karne lage ho.”

“So the movie is as bad as #SaraAliKhan’s dialogue delivery #LoveAajKal #LoveAajKalReview,” the user tweeted.

Romance blossomed between the leads while shooting for ‘Love Aaj Kal’. However, Sara and Kartik’s offscreen romance assured that ‘Love Aaj Kal’ was always in news. The movie received the U/A certificate by the CBFC, which directed the makers to cut some intimate scenes between Kartik and Sara. Directed by Imtiaz Ali, ‘Love Aaj Kal’ features love stories set in two different eras. Apart from Sara and Kartik, the film also features Randeep Hooda and Arushi Sharma in pivotal roles.