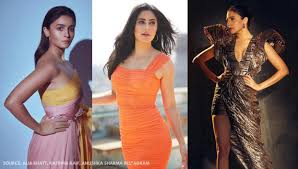 The video shares close-up shots of the actors, who give performances and then burst into laughter. The video also features ‘Pataakha’ actor Radhika Madan is also there who is playing a lead role in ‘Angrezi Medium’.

From Anushka to Alia, divas, who were a part of the video, shared it on their Instagram accounts.

‘Angrezi Medium’ is the story of a father who goes all the way to fulfill his daughter’s dream of studying in a college overseas. The film will hit the theatres on March 13.