Saurabh Shukla and Raghubir Yadav are in the city of Kolkata to shoot for award-winning filmmaker Kaushik Ganguly’s first Hindi directorial ‘Monohar Pandey’. Kaushik, who has multiple National Awards in his hands and honours to his credit for socially relevant and human interest films, such as ‘Nagarkirtan’, ‘Shabdo’ and ‘Apur Panchali’, was not available for the  comment. But however it has been reported that the film would also star Supriya Pathak in the lead role. Shooting  of the flick was commenced  on Wednesday at ‘Kumartuli’ in the legendary colony of idol makers and potters. Earlier, actor Saurabh Shukla said that, “We started the schedule with my shot at the place where the idols are being made. While I have shot for many Bollywood projects in Kolkata, it is for the first time that I am working with a Kolkata production unit. It is lovely to work with Kaushik. But sadly, I can’t reveal anything about my character other than the fact that it is an interesting role. Raghu bhai (Raghubir Yadav) is already here for the shoot while Supriya Ji will join the team after two days.” 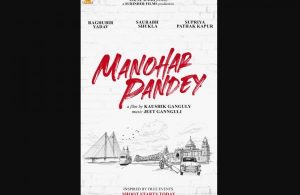 Meanwhile, Saurabh is enjoying his time in Kolkata. An avid table tennis player he was spotted at a local table tennis Club. “On Sunday I played table tennis with champions from Bhawanipore Table Tennis Club and we had a blast. I played with Bengal Champion No 2 and India’s champion no 8,” he added. The actor has also been gorging on Bengali food.

“Kolkata feels like home as this city and its people are so warm. The food here is so damn amazing . I have ordered ‘chholar dal’, ‘rui macher kalia’, ‘bhekti macher paturi’, tomato chutney for lunch,” revealed the actor about his lunch plans.