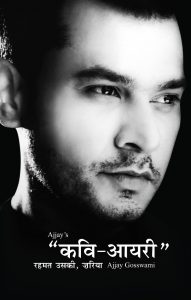 “Kavi Ayri -Rehmat uski, Zaria Ajjay Gosswami” has become the bestseller in the year 2021. It is a collection of natural expressions of inspiring existential poems.

The book is written by Ajay Goswami. This is his debut book.

Ajay has always been a keen observer and has a different take on his surroundings. He gets attracted to deeper sense of himself through spirituality.

In the book you can find many dimensions of living. The poems in the book are in Hindi language.

The book seems to be related to your life once you read it. The author has written the book in the memory of his mother. The book will make every youth aware of his struggle days.

He is a life coach, a motivator, a writer, a poet, a journalist, a film maker. He wants this generation to be filled with positive outlook. He believes that the right kind of knowledge, exposure and attention will have positive effect on society and academics. In one of his poems he says, “khagaalon khud ko tu bhi ek insaan hai taraasho hunar ko vahee teree pahachaan hai”. The language used by the poet seems to be his own because he has faced the everyday problems of ordinary life.

The poet has talked about common life in simple way when he says, “Slipping of sand from hands indicates that there is not much time left with us but there is much more to be done”.

You will find the book giving courage to your own life, whether you are from any place in India.

Sometimes, the depths in the satire hidden in the poems goes deep down. The poet in his book has described the present state of struggle of the youth in his book.