Amidst the time when The emergence of OTT platforms has changed the box-office game drastically it wouldn’t be wrong to say that fans are still as curious as always to know about the films of their favourite Khans – Salman Khan, Shah RukhKhan, Aamir Khan, and Saif Ali Khan.

We all are aware of the fact that Each Khan has a different style and pace of working and is currently busy doing something interesting in their own might. 15 days into 2021 and here’s all we know about the Khan calendar!

Salman Khan : Salman has a plethora of films lined up for 2021 and 2022. The actor’s film Radhe: Your Most Wanted Bhai, which was wrapped in October last year, is likely to hit the screens this year. On his birthday, the actor said that Radhe, which initially was supposed to be Eid release, could still be one but the makers want to ensure that everyone’s safe when they head out to watch the film. He didn’t reveal when the film will release, but hoped that things get back to normal soon so that they could decide on a date for the safe release of the film. Apart from this, Salman also has Kabhi Eid KabhiDiwali, which is reportedly being planned for a May release this year. The sequel of his 2014-film Kick, Kick 2, can also be announced for a release this year.

Shah Rukh Khan  : If there’s one Khan, whose film announcement fans are currently waiting for with bated breath, it has to be Shah Rukh Khan as the actor last graced the big screen in 2018 with Aanand L Rai’s Zero co-starring Anushka Sharma and Katrina Kaif in key roles. In his New Year video message for fans, Shah Rukh hinted that he might return to the big screen this year. Towards the end of the video, Shah Rukh said, “See you all on the big screen in 2021”. However, there’s no confirmation about which film he is referring to. Shah Rukh, in the recent past, has been rumoured to have been in talks for a lot of films including YRF’s big-budget actioner Pathan. 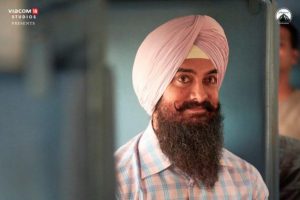 Titled Laal Singh Chaddha, the film co-stars Kareena Kapoor Khan and Aamir and was slated for a Christmas release last year. The actor, however, is yet to announce the final date for 2021. Aamir had also collaborated with director Subhash Kapoor for Mogul, the biopic of Gulshan Kumar. The release date is yet to be confirmed.

Saif Ali Khan: The khan who is in talk these days because of his political drama ’Tandav’ has an interesting line-up of films ahead. From Om Raut’s Adipurush, which is likely to release in 2022 to Bunty Aur Babli 2 and Go Goa Gone 2 which can have a theatrical release this year. Saif’s list of upcoming films looks rather intriguing. The actor will also be a part of Bhoot Police co-starring Arjun Kapoor, Jacqueline Fernandez, and Yami Gautam in key roles. No doubt this khan has an exceptional choice among all.