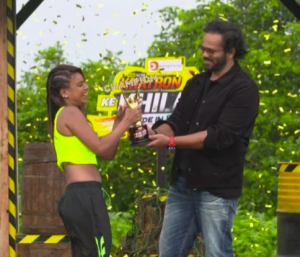 Actress Nia Sharma, the finale of ‘Khatron Ke Khiladi – Made in India’, has won the expanded portion of the program Khatron Ke Khiladi, known as India’s biggest stunt based show. The show did not get any benefit due to the presence of Nia, who is less known for her acting and more for her temperament. This show did not get much love from the audience and that is why neither show was much discussed nor in TRP game during its entire telecast.

The program started in sponsorship of an online card-feeding company ‘Khatron Ke Khiladi – Made in India’ could not even include the true race of the top five shows on the viewers’ favorite list. The show’s stakes for Farha Khan in place of Rohit Shetty, the show started heavily, and the show did not get as much love from the audience as the first episode would have expected from its organizers.

Hype was created about ‘Khatron Ke Khiladi – Made in India’ that it is a 100% desi and paisey thrill game, but when it was finished on Sunday, it also understood that real gold is real and Mulamma is just Mulamma. The show, which had artificial stunts and forced dramas, has done the same as everyone knew. At the end of the show, when Nia Sharma was declared the winner, there was no excitement in the audience for the moment. Everything seemed pre-decided and the scripting of the show was very poor.