Late veteran actor Irrfan Khan’s son Babil Khan is all set to enter bollywood with an upcoming Netflix original titled ‘Qala’. The project has been bankrolled by Anushka Sharma and marks the second collaboration of the actress with Netflix. Babil will soon be seen making his acting debut in Netflix’s Qala. On Saturday evening, Netflix India released a video from the sets of the forthcoming movie and unveiled the first look of the new star. While sharing the video from Qala, Netflix wrote, “From the creators of Bulbbul, Clean Slate Filmz and Anvitaa Dutt, we bring you #Qala, a Netflix Original film. Qala will be here soon to share her story of her fight for a place in her mother’s heart.”

From the creators of Bulbbul, Clean Slate Filmz and Anvitaa Dutt, we bring you #Qala, a Netflix Original film. Qala will be here soon to share her story of her fight for a place in her mother's heart. pic.twitter.com/nPwIX7yF45

The video showed glimpses of Babil from the sets and it also featured the female lead of the movie, Bulbbul fame Tripti Dimri. The video opens with close shots of pages of a script being turned due to the breeze, followed by those of a recorder. Babil soon makes his entry with a camera zooming in for a close-up shot. Babil shared the video on his Instagram handle and wrote, “Tripti freaking Dimri is back again! Whooooooo! (and a little bit of me).”

Talking about his entry in the industry, he wrote, “Also I’m a bit skeptical about the phrase ‘getting launched’ because the audience should launch off their seats while watching our film and not any individual actor.”
Netflix original Qala is being produced by Anushka Sharma and her brother Karnesh’s production house Clean Slate Films. The movie is being helmed by Anvita Dutt (who directed Netflix movie supernatural thriller Bulbbul). The movie marks the second collaboration of Anushka with Netflix, as last year the actress joined hands with the streaming giant for the Bulbbul. Bulbbul also featured Tripti Dimri. 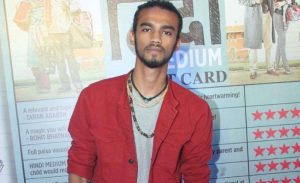 Babil has studied films and acting in London. Earlier this year, he said in an interaction with a follower that he was planning to consider acting offers after he completes his graduation. After signing up for Qala, he had been sharing his emotional journey with the fans while shooting for his debut project. On Saturday morning, he revealed that he has completed the first schedule of the film.

After announcing Oscar 2021 nominees, Priyanka Chopra set to present at...