Bollywood’s action hero Vijay Devarakonda’s upcoming Pan-India film titled Liger has created a buzz since the day the project was announced. The makers had disclosed earlier that they will be making a surprise reveal regarding the cast of the film on 27th September. The makers of the film have lived up to their promise and have surprised the fans with massive news. According to the latest reports, the makers had approached legendary boxer, Mike Tyson, for a cameo in the Vijay Devarakonda starrer movie. 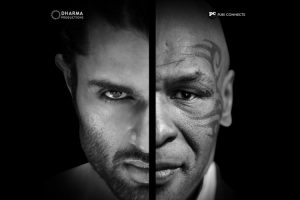 And now, Karan Johar, who will be producing the movie, has gone to his Instagram to announce the great news of Myke Tyson doing a cameo in this martial arts drama venture.

The fans are thrilled with excitement after this announcement and cannot wait for the movie to hit the big screens.