At that time, veteran actress Tanuja started working with Dharmendra and revealed that she slapped the actor and called him “Besharam”. Actor Sholay later apologized to the actress and asked her to make him her brother.

At first, the actress was hesitant, but after Dharmendra convinced her, she tied a black thread on her wrist to make rakhi and made him her brother.

This happened while Tanuja and Dharmendra were filming for Chand Aur Suraj in 1965. At that time, the actor was married to his first wife Prakash Kaur. In an interview with Filmfare in 2014, the veteran actress said: “We were shooting for Dulal Guha’s Chand Aur Suraj. Dharam and I were drinking buddies and would have great fun. He even introduced me to his wife Prakash. Sunny (Deol) was just five then, while his daughter Lali was around six months old.”

Tanuja continued and said, “One day he tried to flirt with me. Taken aback, I slapped him and said, ‘Besharam! I know your wife and you have the audacity to flirt with me’. Embarrassed he pleaded, ‘Tanu, meri maa, sorry bolta hoon (I am sorry)! Please make me your brother’. I refused saying I was happy with my own brother (Jaideep)’. After much cajoling, I took a black thread and tied it around on his wrist.”

Meanwhile, the veteran actress married Shomu Mukherjee in 1973 and the couple have two daughters named Kajol and Tanishaa. Shomu died in 2008 of a heart attack at the age of 64.

What do you think about Dharmendra flirting with Tanuja on the set of Chand Aur Suraj? Tell us in the comments below. 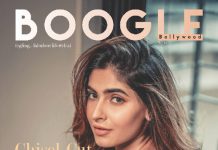