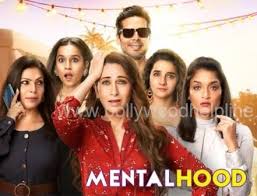 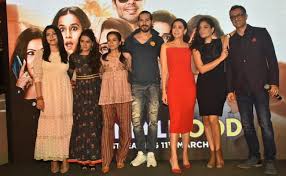 The trailer of the upcoming web series ‘Mentalhood’, produced by Ekta Kapoor, was launched on Monday in Mumbai. The web-series is comedy-drama on six “supermoms” who go through unreasonable expectations and they try their best to raise their children. ‘Mentalhood’ star evergreen actor Karishma Kapoor who had done movies like, ‘Raja Hindustani’, ‘Coolie No 1’, ‘Judwaa’, ‘Dulhan Hum Le Jayenge’ in the leading role.

The trailer launch of the web-series was attended by the cast of ‘Mentalhood’ including Dino Morea who worked in movies like, ‘Raaz’, ‘Aksar’, ‘Aap Ki Khatir’, Sandhya Mridul ‘Page 3’ actor,  ‘Raajneeti’ actor Shruti Seth, ‘Monsoon Wedding’ Tillotama Shome and the producer Ekta Kapoor. They happily posed for the cameras.

Ekta Kapoor looked pretty in a dark blue gown as she posed with Karisma who made heads turned in her red outfit.

Whereas, Dino Morea posed with the poster of the upcoming web series. He wore a blue hoodie and jeans for the evening.

Ekta Kapoor posted the trailer of ‘Mentalhood’ on Monday, on her Instagram profile and wrote, “It’s finally here, my 3.5 years of labor and this is the trailer of the baby we deliver on March 11. It takes a village to raise a child and we (all moms) are the village. The rules of parenting have changed. Motherhood ki iss arena mein koi safe zone Nahi hai, its an all-out war between 6 #Supermoms (In this arena of motherhood there are no safe zones, it is an all-out war between six supermoms). Har parent ki apni-apni strategy hai, sab ka Apna-Apna game, with only one aim – to be the best of the best (Every parent has their own strategy and game with the only aim to be the best of the best)”.

‘Mentalhood’ showcases the roller-coaster ride that mothers witness to provide the best upbringing to their children. The web-series is slated to stream on the online streaming platform ALT Balaji and ZEE5 Premium from March 11.