Mera Fauji Calling revolves around a family of a soldier who sacrifices his life for the country. The movie takes the audience on a journey of heartbreaking struggles of a martyr’s family. It shows how the family tries their best to cope up with the tragedy in their lives. Rajveer Singh (played by Ranjha Vikram Singh), is a soldier serving in the Indian Army. He is not only one of the leading members of the troops but also a family man. He has a loving wife (played by Bidita Bag) and a little daughter (played by Mahi Soni). Their family also has Rajveer’s mother (played by Zarina Wahab). The movie shows the kind of tension Rajveer’s family goes through whenever their phone rings. Though, the family is not ready to hear any bad news about Rajveer, they eventually still get the news of the tragedy.

When the family has almost given up hope, a new and unknown character Abhishek (played by Sharman Joshi) enters their lives. He comes as a guardian angel for them.

So, where is Rajveer and how did Abhishek become a part of this family forms the crux of the story. 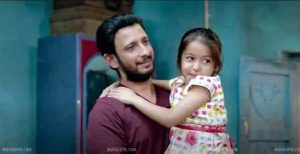 Be it the heroic tales of soldiers or be it movies showing war stories, Bollywood has made many movies on them. However, Mere Fauji Calling is a different story in terms of narration, as it shows the plight of the families of the soldiers. The unconventional plot of the story is heartbreaking and heartwarming at the same time. Director Aaryaan Saxena has done a pretty well job to portray such a story on the big screen. He did not put any extra or unnecessary ‘masala’ in the movie.

Coming to the performances of the actors, they have done a commendable job. Sharman Joshi in the character of Abhishek portrays the right kind of emotions in his role. He has once again proved his experience and skills in the movie. Ranjha Vikram Singh keeps the audience hooked with his character as he performs according to the need of the character. Ranjha’s onscreen wife Bidita Bag perfectly essays the character of a wife who has lost her love and as a mother who keeps a happy face for her family.

Child artist Mahi Soni as Rajveer’s pampered daughter entices the audience with her varied emotions in the movie. Her smile, chirpy talks and innocence of her character steals the show and leaves an impressive mark on the audience.

Overall, the cast was successful in passing on the director’s vision.

In all, Mera Fauji Calling is a story about hope, love and heartbreak, which will definitely touch everyone’s hearts.