Gippy Grewal’s directorial movie ‘Shava ni Girdhari Lal’ next track is going to be released on 14th December 2021. The audiences were already thrilled with the trailer of the movie, title songs and in the meantime the makers are all set to release yet another song of the movie named ‘Jatt Ni Yaariyan’. Till now, the songs which are released have been loved and appreciated by everyone.

Recently, the whole team released the song ‘Kujeete’ which got hyped among audiences and recently shared the behind-the-scenes of the film which shows the making of the film’s star cast enjoying every bit of the filming of the new venture. The film consists of an ensemble of casts which has gotten the fans excited even more.

Gippy Grewal is very well known for his unique storylines which made his film craze among the audience. Films like Warning, Paani Ch Madhaani which got loved by each and every person. Kamal Khan is the composer of the song. The lyrics of the song written by Happy Rajkoti. The movie has been directed by Gippy Grewal and Rana Ranbir is the co-writer. The movie has a huge number of  star cast, a popular Punjabi faces includes Karamjit Anmol, Gurpreet Ghuggi, Rana Ranbir, Neeru Bajwa, Sara Gurpal, Yami Gautam, Payal Rajput, Himanshi Khurana, Tanu Grewal, Seema Kaushal, and many more.

The movie is a dramatic comedy that has been produced by Gippy Grewal, Ashu Munish Sahni, and Vashu Bhagnani. The movie is presented by Pooja Entertainment, Humble Motion Pictures, and Omjee star studios.The movie is scheduled to release on December 17th, 2021. 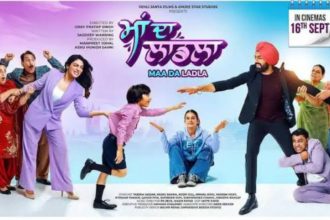