Sidharth Malhotra who is one of the well-known actors of Bollywood has now become the global face of Timex from India.

Sharing the video, Sidharth wrote, “You are strong. You are resilient. If you get knocked down, you get right back up. You Don’t Stop! And that’s what really matters. I’m so proud to be a part of the “We Don’t Stop” campaign by @timex @timex.India , a campaign that celebrates stories of passion, determination and fearlessness. I believe that everyone has a #WeDontStop story and these stories should be shared with the world. Time does not stand still and neither do we. So let’s keep pushing to change the world together!” 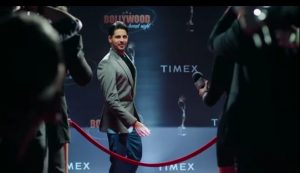 Sidharth Malhotra made his debut from the film ‘Student of the year’ in 2012. He has been seen in many films like Ek Villan, Baar Baar Dekho, Kapoor and sons, Brothers, Aiyaari and many more.

He will next be seen in ‘Shershaah’ that is directed by Vishnuvardhan and co-produced by Karan Johar. It is based on the life of Param Vir Chakra awardee and army captain Vikram Batra. He will be sharing the screen with Kiara Advani.

He also has the film ‘Mission Majnu’ that is being directed by Shantanu Bagchi and will be based on India’s audacious covert operation in Pakistan during the 70s. Sidharth will share the screen with South superstar Rashmika Mandana.