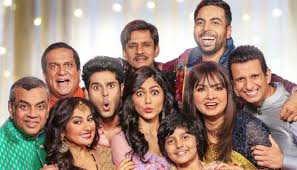 ‘Maine Pyar Kiya’ actress Bhagyashree’s son Abhimanyu will be seen with ‘Ghost Stories’ actress Mrunal Thakur in family entertainer ‘Aankh Micholi’, which is being served by ‘102 Not Out’ director Umesh Shukla.

After the success of ‘102 Not Out’, Sony Pictures Films India and Shukla have come together for ‘Aankh Micholi’. The film revolves around a family of an oddball.  It is expected to be a Diwali 2020 release.

Talking about the film, director Shukla said: “The film is very close to my heart and I am proud to have been able to bring such an exciting cast together for the film.

‘Aankh Micholi’ is produced by Sony Pictures Films India, Umesh Shukla and Ashish Wagh’s Merry Go Round Studios and the film will be shot across India and Europe.

rubbalchauhan February 20, 2020
Previous Article Kriti Sanon and her pregnant belly gets leaked from ‘Mimi’ sets
Next Article Govinda FINALLY breaks his silence on ‘Coolie No 1’ remake