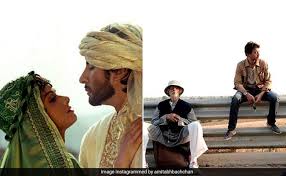 Amitabh Bachchan’s paid tributes to two of his co-stars – Sridevi and Irrfan Khan – in his latest post on Instagram. As his films ‘Khuda Gawah’ and’ Piku’ clocked 28 years and 5 years, on Friday, Amitabh Bachchan remembered his co-stars in a throwback post on social media.

He shared a picture collage with Sridevi, and the another one from film ‘Piku’, which starred Irrfan Khan alongside him. Sharing the collage, he wrote: “28 years of Khuda Gawah… 5 years of Piku… Today May 8… and in remembrance of the two that have left us.”

Sridevi died of cardiac arrest in Dubai in February, 2018. She was 54. The late actress co-starred with Amitabh Bachchan in Inquilaab, Aakhree Raasta and Khuda Gawah. The actor also made a special appearance in Sridevi’s comeback film English Vinglish, which released in 2012.

Amitabh  worked with Irrfan  for the first and last time in ‘Piku’. The actor died in Mumbai’s Kokilaben Dhirubhai Ambani Hospital on April 29 after battling cancer for two years. After Irrfan’s  death, Big B described him as “an incredible talent” and a “gracious colleague” in his tribute.

“Just getting news of the passing of Irfaan Khan. This is a most disturbing and sad news… An incredible talent… A gracious colleague, a prolific contributor to the world of cinema. Left us too soon. Creating a huge vacuum. Prayers and duas,” Amitabh said.