Amitabh Bachchan who is the legend from the industry will soon be seen in Fakt Mahilao Mate in a friendly appearance. While sharing this immensely and amazing news Amitabh wrote “We read minds, and we are here to entertain Mankind”. Watch my friendly appearance on Fakt Mahilao Mate which will be released on 19th of August in the nearest cinemas. The movie is a fun and frolic story full of logical and mysterious learnings. It’s a narrative which can be easily conveyed to the audience. This is the second collaboration of Amitabh Bachchan with producer Anand Pandit, after Chehre. Well this is the most anticipated venture as Amitabh is a big name in the industry.
Amitabh first became well-known in the early 1970s for performances in movies like Zanjeer, Deewaar, and Sholay, earning the moniker “angry young man of India” for his portrayals in Hindi movies. He has been referred to as the Shahenshah of Bollywood (in reference to his 1988 film Shahenshah), Sadi ka Mahanayak (Hindi for “Greatest actor of the century”), Star of the Millennium, or Big B. He has since appeared in over 200 Indian films over the course of a career spanning more than five decades and has won numerous honours in his career, including four National Film Awards as Best Actor, the Dadasaheb Phalke He is the artist with the most nominations in any category, having won sixteen Filmfare Awards. His recent ventures like Pink, Gulabo Sitabo, Wazir, Jhund etc. He will soon be seen in Brahmastra- Part One Shiva, Uunchai etc. He has also been seen hosting the Sony Entertainment’s show Kaun Banega Crorepati etc. He has a very big and tremendous name in the industry and had massive fan following too. Well his present venture in Gujarati is really awaited and fans are gushing to see him in Gujrati movies. 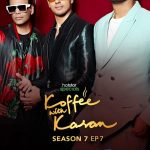 Koffee With Karan to have Vicky Kaushal and Sidharth Malhotra in the next episode. Teaser unveiled.
Next Article

The molestor of Urfi’s case has finally been put behind the bars. Read to know more.