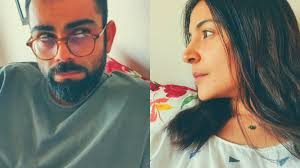 Anushka Sharma surely knows how to have fun and her latest Instagram entry is a proof of that. Anushka posted a video on her Instagram profile, in which she kept shouting: “Kohli, chauka maar na. Kya kar raha hai?” Meanwhile, Virat Kohli could be seen rolling his eyes in the video.

In her post, Anushka revealed that she was sort of mimicking a specific type of cricket fan.  She captioned the post: “I thought he must be missing being on the field. Along with the love he gets from millions of fans, he must be especially missing this one particular type of fan too. So I gave him the experience.” Anushka’s post was flooded with comments. Kartik Aaryan wrote: “I am that fan.” Arjun Kapoor dropped a hilarious comment and wrote: “Depend should have been for a 6 at least.”

The couple have been actively sharing awareness messages and some glimpses of their quality time together.

On the professional front, Anushka  was last seen in Aanand L Rai’s 2018 film ‘Zero’, co-starring Shah Rukh Khan and Katrina Kaif. The actress has not announced any upcoming projects as of now but her production house Clean Slate Films will back Netflix’s web-series Mai.